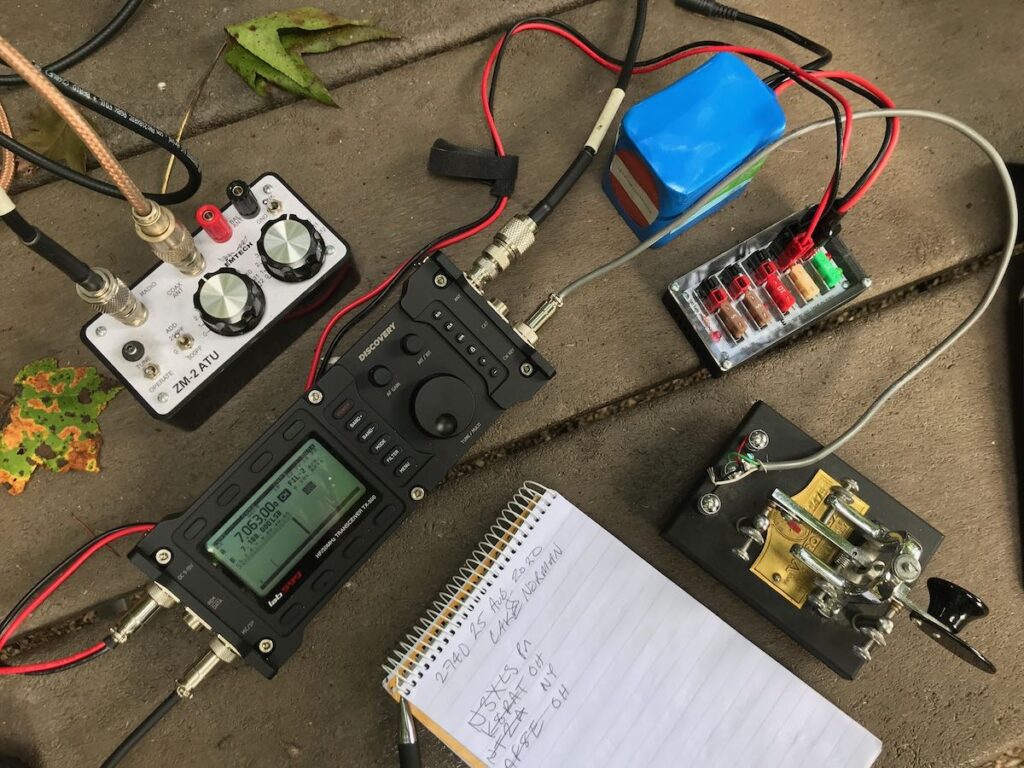 At least 95% of the time I’m playing radio in the field, I use wire antennas and suspend them in trees. 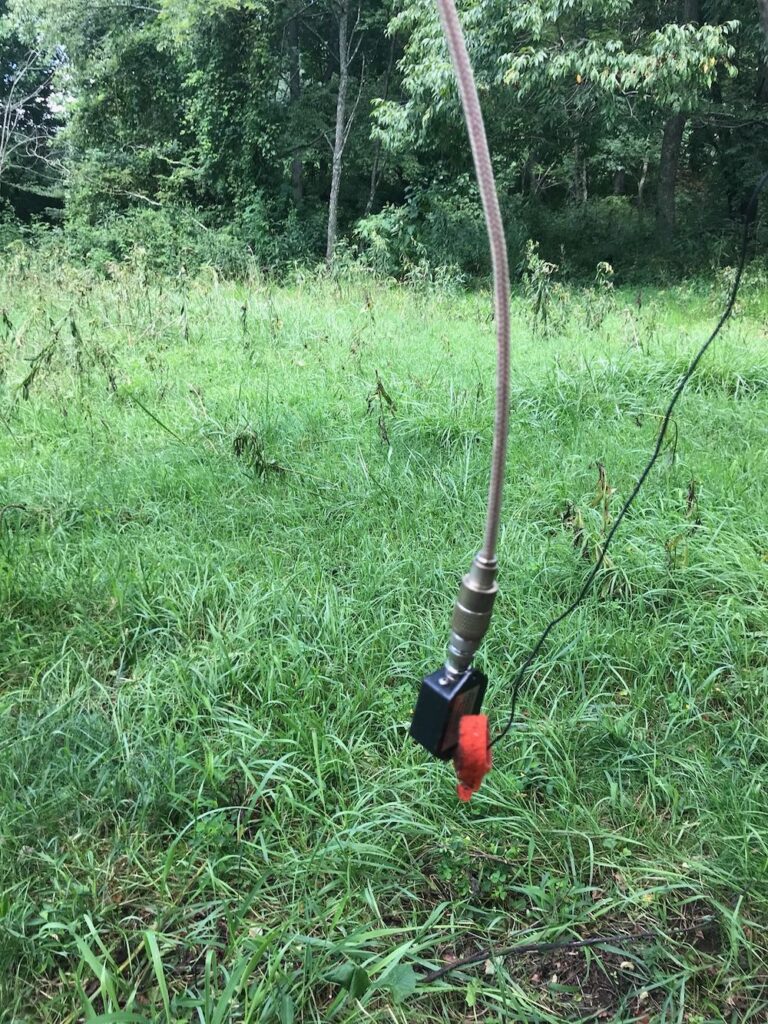 Since I do a lot of park activations for the POTA program, trees are typically very easy to come by and most of the time the park office doesn’t care if I hang an antenna in their tree for a couple of hours.

For years, I’ve been using a heavy steel nut–a nut that would fit a very large bolt–as a weight and attach it to fishing line. I then simply throw the nut into a tree and pray the fishing line deploys properly. I have reasonably good aim, so–on a good day–I typically only need one or two throws/tries to get the fishing line over a branch. On bad days? Well… let’s just not talk about that.

There are some inherent weaknesses in the fishing line/monofilament system:

First of all, I’m lobbing a heavy metal object into the trees. If it ricochets–and it eventually will–it can come back down to earth and land where you might not want it to (for example, on your radio, on your car, or on your friend’s head).  Fortunately, I’ve never hit anything or anyone as I’m careful to clear the area first, but unfortunately, I once had the nut hit a tree and come back down near me. That was a little scary.

Secondly, fishing line isn’t exactly recyclable and you simply can’t use it over and over. I get at most three deployments with a section of fishing line before it gets too stretched and unworkable.

Finally, fishing line is incredibly prone to tangle, especially near the end of the spool. 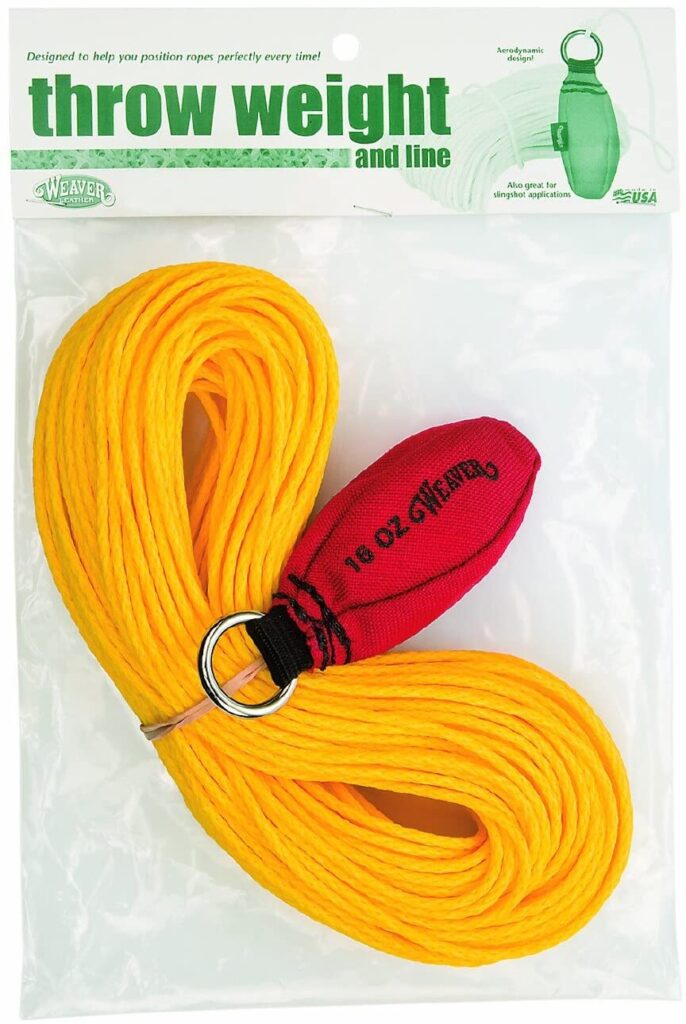 The arborist throw line is no recent innovation. For years, I’ve read recommendations from other ham radio operators who swear by arborist throw lines but I only recently decided to take the plunge after one very frustrating park activation where my fishing line knotted and almost got permanently stuck in a gorgeous tree. I’m very much a “Leave No Trace” kind of guy, so I was incredibly relieved when I was finally able to work the fishing line out of the tree.

When I got home from that activation, I ordered a Weaver Throw Weight and Line and a Throw Line Storage Cube. (Note: these are Amazon affiliate links that support this site.) 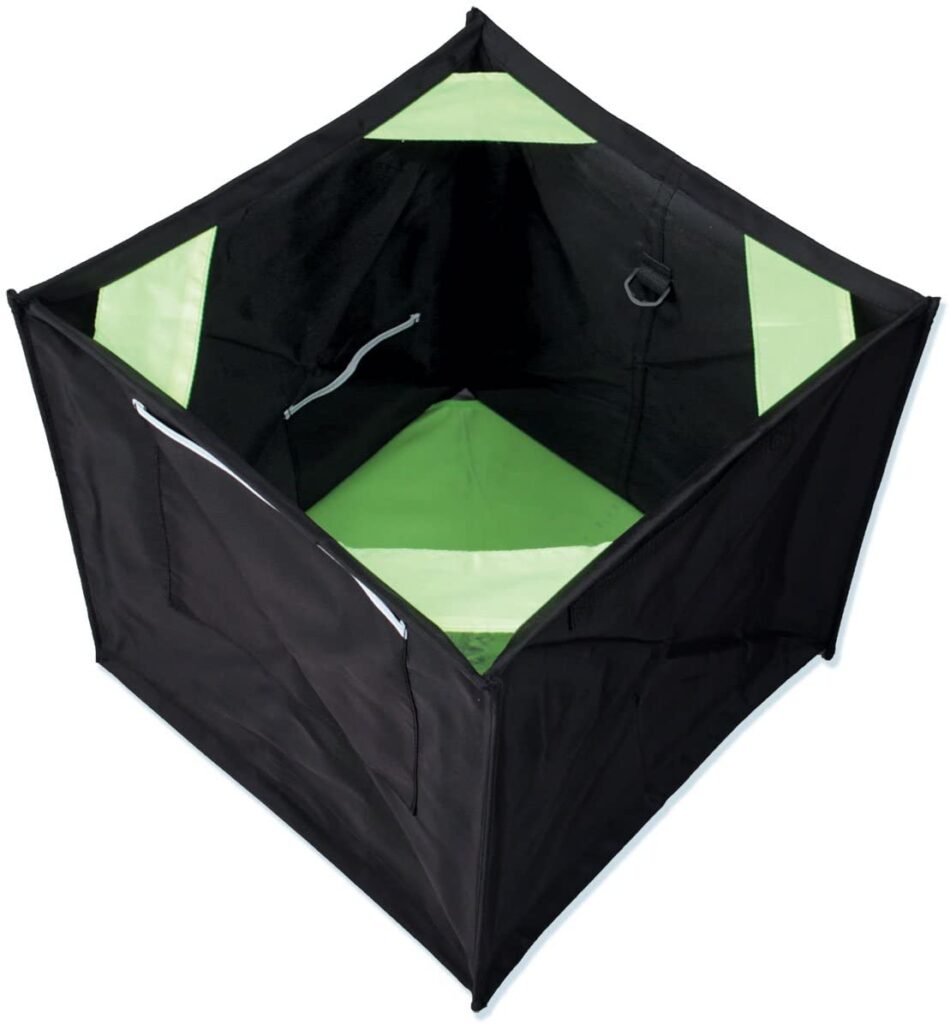 I once talked with an arborist about throw lines and he stressed the importance of getting not just the line, but also a throw line storage cube. The cube allows you to both deploy and take up the line without any tangles or knots.

My arborist buddy gave me an important tip: the throw line needs to be stretched.

As you can see in the photo above, the throw line is packed in a bundle that’s easy to unroll. After you unroll it for the first time, though, the line has a “memory” of all those bends from its life in the package.

You can remove much of the throw line memory by tying one end of the line to a tree and stretching the line to its full length. The line is 150 (or so) feet long, so you’ll need an open space to do this.

The arborist in this video shows how this is done (I’ve queued it to the point in the video where he shows how to do this):

You’ll need to attach the throw line to the throw weight, of course.

There are a number of knots arborists use, but I’m a fan of the slipped simple noose knot. Perhaps it’s because it’s easy to tie even with semi-rigid line, it holds quite well and, most importantly, it’s easy to untie.

Looks like arborists use it too because when searching for an instructional video, the first result was from an arborists’ channel:

There are a few different ways to launch a throw line into a tree.

Take my advice here: practice at home before you hit the field! It could save you a lot of embarrassment, although, admittedly, my at-home practice sessions gave my wife and my daughters good reasons to chuckle.

I’ve only been using the throw line for a little over a week, so I’m still sorting out which method works best for me. One thing I discovered very quickly, though: no matter which launch method I use, I can send that throw weight into a tree at least 60% higher than I could before.

No doubt, the throw line and weight really put the laws of physics in your favor! 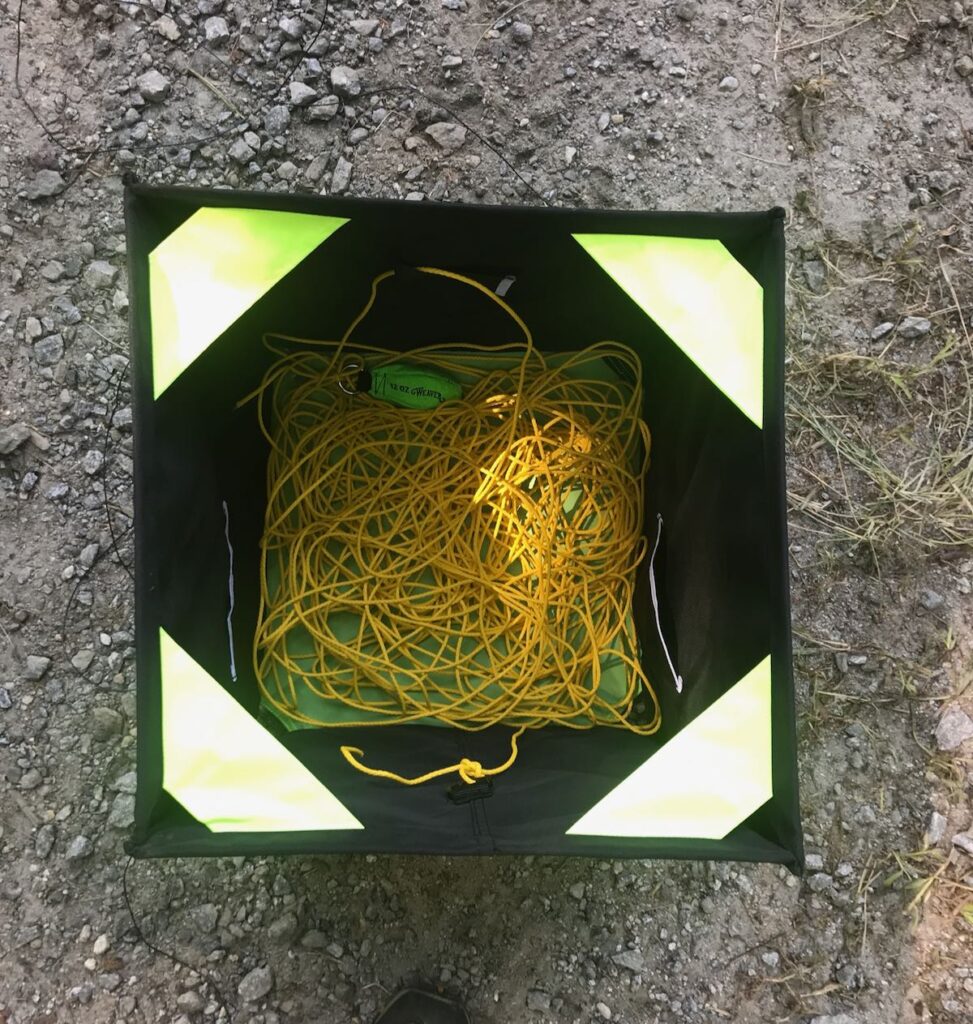 I took the throw line to the field today for the first time and I’m very pleased with how effectively it works.

I was able to place my antenna on a much higher branch than I could have otherwise. It took me three tries today, but it had more to do with my poor aim. As with any skill, this will, I think, improve with practice. 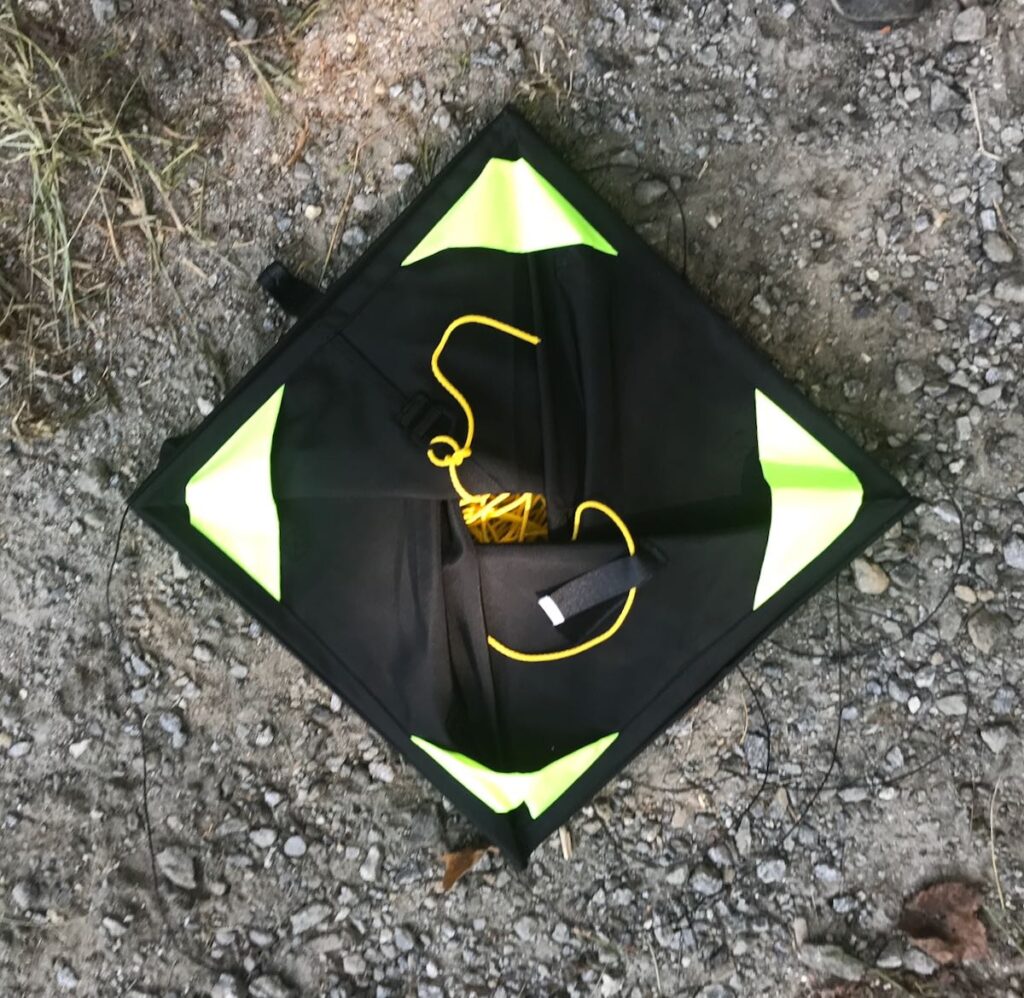 Besides the improved antenna height, I love that the line can be used over and over again. Also, it’s strong enough that should it ever get caught in a tree, I can pull it out without the line breaking.

I can also reel in the line at least three or four times faster than I could with fishing line. Simply flake it into the storage cube one foot at a time.

When the line has been stored along with the throw weight, you can fold the storage cube down flat, then fold and secure it into a compact triangle.

Are there any negatives with the throw line system? Here are a few I’d note: 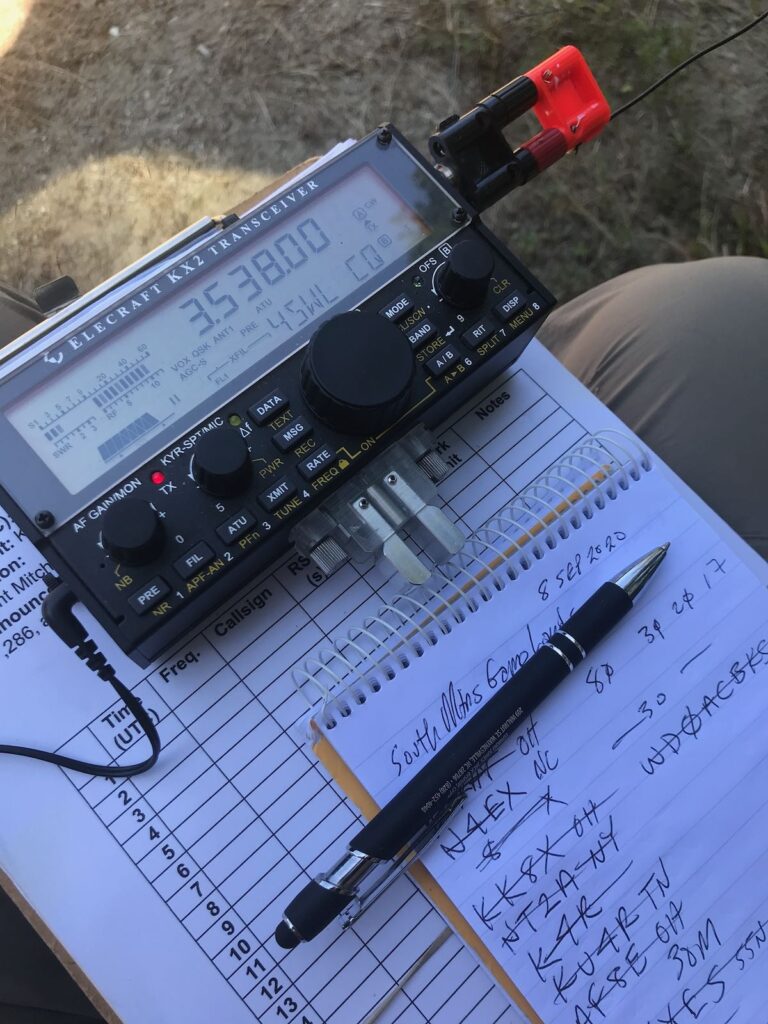 Even though it’s bulky by my standards, I see the throw line becoming a permanent part of my field kit and I expect I’ll use it on most of my POTA activations.

Have you been using a throw line to hang field antennas? Or do you use a different system?  Please comment!

Tiếng Việt
Login to your Account
Register in N6AQ.com