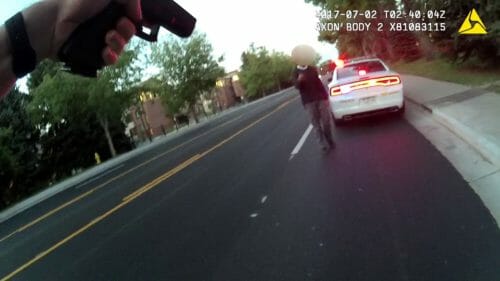 In the police video, Holmes stated that he wanted police to shoot him. Morris tried to holster his gun to change to his taser to stun Holmes. Before he could, Holmes charged Morris with the knife forcing the officer to shoot and kill him.

The investigation determined that Holmes committed suicide by cop. The internal investigation cleared Morris of any wrongdoing because of the video evidence. He returned to duty.

Under Colorado’s red flag law, a family member, household member, or law enforcement officer can file an extreme risk protection order. One of the choices on the form is “I have a child in common with the respondent.” Holmes marked that she and Morris has a child in common.

Holmes points out the form says nothing about having a biological child in common. In her interpretation, she and Morris have Jeremy Holmes in common. The law’s intent was to let a family member file the report, but the form does not make the intention clear.

Holmes check the box on the form that stated Morris was “a credible threat of or the unlawful, reckless use of a firearm.” She stated on the form that “Phil Morris used his firearm to recklessly & violently threaten and kill 19-year-old Jeremy Holmes.”

Holmes also marked that Morris “might” have a history of domestic abuse. AmmoLand has not been able to find any domestic violence charges against Morris. Since the ERPO doesn’t require proof or the person to be sure of the charge gun-rights activist, believe complainant could exploit this question to get the ERPO through the courts.

“We predicted this and said a falsely accused person has no recourse other than hoping a DA files charges,” Neville tweeted. “No recourse to recoup lost wages or reputation. One example of many about how this bill was so horribly written.”

Senior Vice President of Gun Owners of America sees this as an example of why red flag laws do not work.

“This is the very reason we cherish Due Process,” Pratt said. “No one should lose ANY of their rights without a trial by jury, or without the benefit of having one’s counsel present before the judge, or without facing his or her accuser. But “red flag” gun confiscation orders throw Due Process out the window. They strip people of their gun rights without any trial whatsoever, as the police show up to confiscate weapons before one even knows there’s an issue. These laws are egregious. And that is why Gun Owners of America is working to defeat this legislation in Virginia and elsewhere — and to repeal these guns grab laws wherever they’ve been enacted.”

Morris will now have to fight for his Constitutional guaranteed gun rights in court on Thursday. Gun rights activist points out that Morris will have to prove his innocence. They believe that goes against the American tradition of “innocent until proven guilty.”

Alan Franklin, political director of ProgressNow, pushed for the Colorado law. He does not see this case as a failure of red flag laws, but just a one-off case.

“If she lied under oath, she should face charges for that,” Franklin tweeted. “That is not a failure of the law, nor will be the dismissal of the ERPO request if it’s unfounded. Also there is nothing improper with the judge holding an initial ERPO hearing. That’s due process.”

Five ERPOs have been filed in Colorado. Only one has been denied.

John is a NRA instructor and a constitutional activist. He is the former CEO of Veritas Firearms, LLC and is the co-host of The Patriot News Podcast which can be found at www.blogtalkradio.com/patriotnews. John has written extensively on the patriot movement including 3%’ers, Oath Keepers, and Militias. In addition to the Patriot movement, John has written about firearms, interviewed people of all walks of life, and on the Constitution. John lives in Northern Virginia with his wife and sons and is currently working on a book on leftist deplatforming methods and can be followed on Twitter at @crumpyss, on Facebook at realjohncrump, or at www.crumpy.com.