The King of Gaffes Retains His Crown ~ VIDEO 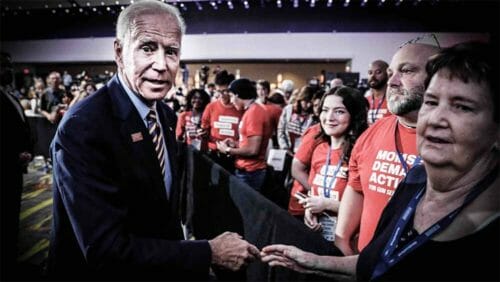 Fairfax, VA – -(Ammoland.com)- After the Las Vegas, Nev. Democrat Presidential debate, where New York City billionaire Michael Bloomberg made his embarrassing debut on the stage, many expected the Charleston, S.C. debate to be another debacle. They were not disappointed.

After a relatively quiet performance in Vegas, the undisputed, undefeated King of Gaffes, former Vice President Joe Biden, returned to form. Biden seemed to take a step back while Bloomberg was pummeled in Sin City. A solid strategy for a man prone to making mistakes whenever he speaks publicly.

But Joe simply couldn’t go two debates without saying something that would leave most scratching their heads.

While trying to show how much more anti-gun he is than all of his colleagues on the stage, Biden claimed that nearly half of all Americans had lost their lives due to firearms over the last 13 years.

Apparently, Biden watched Avengers: Infinity War as his debate prep, and thinks that gun manufacturers are owned by Marvel Comics villain Thanos. This character, of course, wiped out half of the life forms in the universe with the snap of his fingers, in spite of facing off against the mightiest superheroes in the Marvel Cinematic Universe.

Maybe in Biden’s unique mind, he fancies himself the greatest power on earth. He does, after all, seem to take credit for nearly everything. This elevated sense of power might explain his awkward turn to the camera during the debate as he stated, “I’m coming for you, and gun manufacturers, I’m gonna take you on, and I’m gonna beat you.”

Where Biden came up with the ludicrous number of 150 million is anybody’s guess, but it is simply not true. In fact, saying it is not true is putting it mildly. The claim is absolutely preposterous.

Sadly, not a single person, either candidate or moderator, bothered to call into question such an absurd claim. While not everyone is well-versed in the actual numbers of fatalities related to firearms, more than half of which are suicides, someone might have done a quick calculation to figure out that firearms are clearly not involved in 11.5 million deaths each year.

Had he actually made the claim jokingly attributed to him by the satire site The Babylon Bee, [Joe Biden Claims He Is Only Human Left On Earth Not Killed By Gun Violence..lol] be likely would not have been challenged by anyone at the debate.

But that is where we are today with the field of Democrat candidates who want to destroy the Second Amendment, along with their enablers in the media (the moderators); no lie is too big to make guns look bad.

In fact, leading into the whole discussion on firearms at the debate, moderator Gayle King lamented over the fact that Congress had not passed “major gun legislation in a quarter of a century,” after running through a litany of tragic events she apparently blames on that notion.

King and her fellow moderators did not fare very well in how they handled the debate.

Biden didn’t make “150 million” his only gaffe, though. He also claimed he was able to get “magazines that could not hold more than ten rounds in them…eliminated.” What he was referring to, of course, was the 1994 ban on “assault weapons,” which also included a ban on the manufacture or importation of magazines that COULD hold more than ten rounds. And they were clearly not “eliminated,” as those already possessed, manufactured or imported when the law went into effect were completely legal.

But at least he’s not still confused over the terms clips, magazines, and rounds.

And the debate wasn’t the end of Biden’s gaffe-fest for the week.

The very next night, during a CNN town hall event, the former VP said of the Second Amendment, “From the very beginning the Founder[s] said, ‘Not everyone is able to have a gun and you can’t have any weapon you want.’”

That’s not just a misinterpretation of what the Founders said, it is patently false.

Thomas Jefferson said quite a bit about armed citizens, but perhaps his best counter to Joe’s claim was when he wrote, “No free man shall ever be debarred the use of arms.” Sounds like Jefferson meant everyone.

Samuel Adams wrote, “The Constitution shall never be construed to prevent the people of the United States who are peaceable citizens from keeping their own arms.” Again, no equivocation about who can own what arms. Or maybe Joe has another government list in mind, where he gets to determine who is “peaceable,” and who is not.

Of course, we do not object to those who are not “free” because they are in prison from having access to firearms. Perhaps that is also what is meant by “peaceable,” as in, persons not in jail are presumed to be “peaceable.” If that’s what Biden means, then that’s fine, but somehow we think that is not the case. But beyond the obvious distinction of actual convicted criminals, leaving it up to Biden to determine who can own what firearms is clearly not what the Founders had in mind.

There are innumerable quotes from our Founding Fathers that support the correct view that the Second Amendment means what it says: “…the right of the people to keep and bear Arms, shall not be infringed.” If Joe can point to any of them indicating they only meant some “people” (and how it is determined which ones) and some “Arms” (again, what is the criteria for determining which “Arms” are allowed), we’d be happy to look into whatever rewrite of history he has found.

When the next debate rolls around, which is scheduled for March 15, 2020 in Phoenix, Ariz., we look forward to seeing him add to his ever-lengthening list of gaffes. Not to mention his public appearances between now and then. Joe has made it clear that, if you want to see someone say something absurd, laughable, or embarrassing, he is, as they say, Must Watch TV.