My Evaluation of the Tennadyne T-8 Log Periodic Antenna

Hello, please take a few minutes to read this write up. It may help you during the assembly phase or give you insight as to the superb material and design of the Tennadyne T-8 Log Periodic.

My journey with the Tennadyne T8 started with an inquiry for a Cubex quad, so I reached out to the company and Mark Chouinard K5YAC responded. Mark explained to me that he just purchased the Tennadyne and Cubex quad companies and was still getting organized after relocating the companies to Oklahoma. After several discussions I initially wanted the T10 HD but due to logistics and delivery time I settled on the T8.

The antenna arrived within a week from Oklahoma and showed up in an approximately 6’ long by 6×6 box. As in typical ham fashion I immediately opened the box to inspect the contents and locate the manual.

That night I thoroughly thumbed through the manual and noted general assembly procedures. The manual was not easy to get through or use when constructing the antenna. The pictures were very poor and lacking in detail.

I had the opportunity to speak with Mark several times through this build and he said that the manuals are on the radar to be updated.

The first head scratcher I encountered was during the boom assembly and splices. It took me a bit to realize that the screws and locknuts used actually go into the boom and not through the boom. If you look at the boom sections and the boom splices you will see that one side has bigger holes. That’s the side the screw goes into.

I have to point out that the hardware is Stainless Steel and the machining of the boom and elements are top notch. The tolerances are very tight and fit perfectly some very slight sanding with fine emery cloth may be needed, but not in my case.

Assembling the elements is very straight forward, you will notice that some of the tubing has bigger holes for the screws, just be mindful of this and follow the instructions regarding a machining mark to indicate the tube end that goes into the boom sub assembly and you should be fine.

READ THIS!   I managed to get the antenna assembled and installed with the help of my son. I raised the antenna and heard booming signals on 10-20 meters. I began checking the SWR and tuning and it was horrible, all the bands were 3+ SWR I think 18 meters was almost usable without a tuner. I checked everything and reviewed the manual, in final desperation I reached out to Mark Chouinard on Christmas day and he actually responded.  I sent him several pictures and he forwarded them to Roger who used to own Tennedyne and Cubex. Mark reached out to me on Christmas day and asked me if I was trying to build a yagi. Needless to say I immediately had that sinking feeling and after the dust settled I realized that I screwed up the element to boom placement. After researching this I realized my mistake and the elements needed to be 180° out of phase to work properly. Sooo this meant lowering the antenna, taking it off the tower and splitting the boom again. 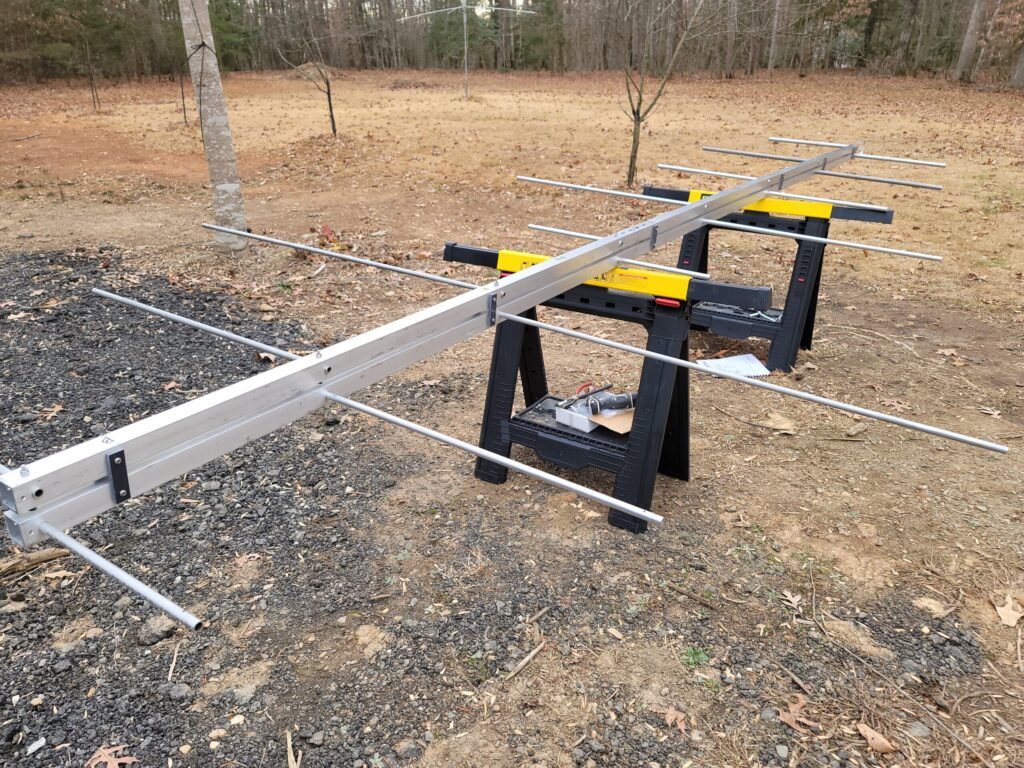 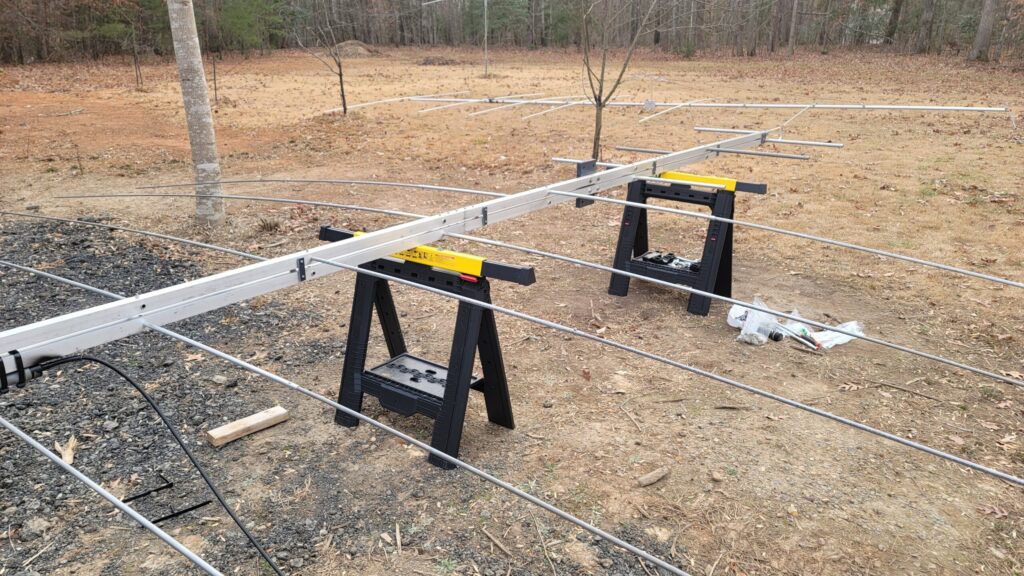 Once I fixed the problems I caused,  the antenna worked as described on all bands but 12 meters. The SWR is 4+ on 12 meters and was not usable.

After struggling with a solution and spending time on the phone with Mark Chouinard k5yac the owner of Tennedyne and Cubex Quads the only other fix we could come up with was to try the standard Collins choke that is recommended for the log periodic antennas. Instead of using ferrite or a balun I thought would work I had Mark send me one of his Collins chokes.

The Collins choke arrived and the craftsmanship was top notch, weather proofing and construction was high quality. After mounting the Collins choke at the front of the boom I raised the antenna back into position @60′. The results were better than what I was expecting 14mhz and 21mhz were 1.0swr, 28mhz and 18mhz were a 1.3 to 1.4 and 24mhz had come down to 2.5 swr well within tuner range. I rarely use 12meters and when I do its easy enough to tune out.

So here is the meat and potatoes of this antenna. I am glad I purchased this antenna, this design is a performer no doubt I have not needed my amp AT ALL for any of my 10-20 meter contacts, I enjoy DX and have made contacts globally with 100 watts usually on the first call with surprised responses when the DX stations finds out I am only running 100 watts.

You will have a 1.0 swr, all the bands are showing 1.0 to 1.4 other than 12 meters at a 2.5 swr, this is more than acceptable. The antenna looks very cool and is light weight enough for smaller rotors like the ham 4. It works really well and the specs seem to be in line with what I am seeing. I would definitely recommend this product and the customer support from Mark was superb, even above and beyond responding on Christmas day.

We had an out of the norm snow storm in Virginia that dumped almost 24 inches of a heavy wet snow in less than 24 hours. The snow damaged my GAP titan and the Tennedyne T8  came through it perfectly.

I did want to test the T8 with the booms covered in snow but my power was out for almost 5 days, I wanted to see how the snow would react while it was shorting the booms.

I rate this antenna 4.8 stars. I would have given it a 5 star rating were it not for the lacking manual and the 12 meter issue due to the CMC caused by running the coax along the bottom boom.

While speaking to the guys on 80 meters some of them suggested putting dowel rods or fiberglass rods into the element where it enters the boom for support. The old timers said in the past that was a failure point on the Tennedyne antennas.  I can see that happening and I would suggest welding a solid aluminum rod into the boom section that you would put the element onto. This would make it very sturdy and fool proof when guys like me try to build a yagi out of a log periodic antenna.

The other tip was to get the coax at least 24” off the bottom boom and for a clean look use PVC and build yourself some stand off’s. I have some that I built and once they are attached I will include some pictures.